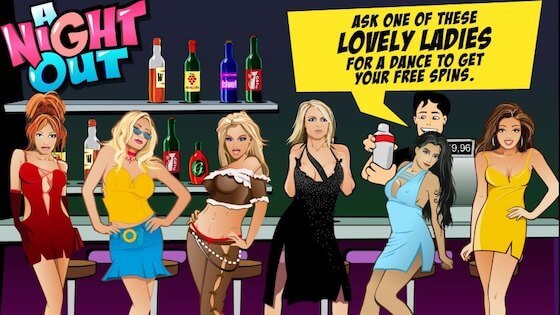 Best Casinos to Play A Night Out

Another blast from the past from Playtech comes with the neon light an often-obnoxious vibe of the early 2000s club scene with the A Night Out slot. Clearly inspired in the now somewhat distant nightlife escapade vibes of a world yet to have social media, it immediately looks retro.

A Night Out Slot’s RTP

A 5 reels and 3 rows gameboard has 20 paylines active across to help enliven this party. The betting range goes €0.20 as the lowest and €200 as the ceiling, quite a few to spend on drinks for the chicks there. Lastly, A Night Out Slot’s RTP sits at a standard 96.16%.

A Night Out Slot Sites

Forget about going to your nearest trendy nightclub (does such thing even exists anymore?). Sign in to one casino site from this approved list to have A Night Out Slot spinning away.

A Night Out Slot Theme

The game is all about, you guessed, have a night out at the club, something that was all the rage before the smartphone, apparently. Jokes aside, the low-paying icons on the reels feature nothing but trendy cocktails with the fruit used to make them by the side.

The high paying, however, are a brunette, a redhead, and a blonde chick whose faces tell you they are either party girls, love dramas, or both. Lastly, the wild is a beer in a glass, because that’s what you drink at a trendy club, right? The scatter is a stiff-looking red hair on the dancefloor approaching you with her twin (?) looking on. And a suspiciously cheery bartender (those are not real) acts as the bonus symbol.

A Night Out Slot Features

The wild of the game, a beer on glass, can pay big in this game because beer on glass is something that you totally drink when going to a trendy club. Land five different wilds across the reels in the same payline and you get an impressive 10.000x your bet winnings.

The scatter, which is a particularly stiff-looking redhead in a yellow dress on the dancefloor coming at you while her twin(?) looks on, pays big. In a twist of fate, instead of giving you free spins, the scatter simply pays out its amount multiplied by the total bet you placed. Land three of them to get 3x your bet, four for 10x, and 5 for 50x your total staked amount.

As mentioned before, A Night Out slot has the distinction one of the few video slots in which the scatter doesn’t give out the free spins, the Bonus icon does. Was that the result of an embarrassing mix-up? Maybe triggered by having too many cocktails during a night out, perhaps?

Regardless of speculation, the bartender bonus icon is the one that triggers the A Night Out Slot free spins round.

Before even starting, you are going to have to choose one of the fancy-looking ladies from the bar. Each one of them gives a random amount of free spins that goes from a miserable 2 to a respectable 20 free spins. After choosing them, you, as the gentleman you are, will also have to choose them a drink which this time gives a random multiplier of 2x to 10x. Then, you are off to spin away.

The bartender bonus icon only appears in reels 1 and 5 during the base game. It will also appear in those same reels during the free spins and, if it does land it both, it’ll add more free spins with the same multiplier.

A Night Out Slot – Our Verdict

The theme is pure early 2000s campiness, and the game is completely basic. Let’s face it, players that spin in the A Night Out slot want to remember simpler times just like the people still thinking nightclubs are the coolest. Nothing wrong with that but nothing really serious comes out of It nowadays since there are better slots, and places, to have fun at.