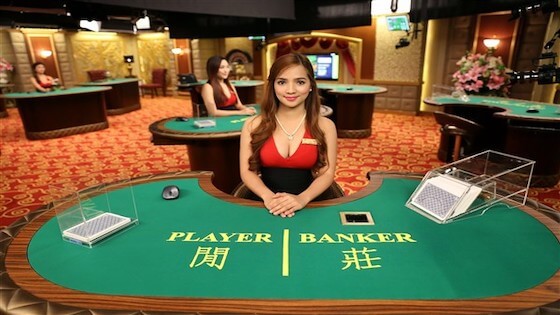 Live dealer baccarat is rapidly becoming the online casino game of choice throughout Europe and the United Kingdom. The game of baccarat, pronounced “bah-kah-rah”, has been associated with sophistication and wealth throughout the ages.

Catering to high rollers, you can usually find a baccarat room tucked away from the main gaming tables, surrounded by velvet ropes and guarded by well-dressed hosts.

Drinking champagne and eating caviar, the players can enjoy a quiet evening together playing a simple game of chance; and with the small house edge, it just makes sense to play.

There are some conflicting views on exactly where the game of baccarat began. Some think that the game is a variation of the French “vingt-et-un”, which we know as blackjack.

There are others who believe that the game evolved from a game that was played with Tarot cards during the middle ages.

What most historians do agree on though is that the game was originally played in Italy and then introduced into France in the late 1400s by Charles VII.

By the time the 1600s, rolled around, baccarat was a favourite of French royalty.

This French version gained popularity throughout Europe, where it is still the game of choice in some of the most popular casinos in the world.

The version played in the United States today was developed in Great Britain and exported into Central and South America.

It was finally introduced into Nevada in the 1950s from Havanna Cuba’s famous Capri Casino, and this style of baccarat has remained pretty much the same throughout the decades.

While it is not as popular as Roulette or Blackjack, Baccarat has found its niche in the U.S. casinos and is slowly but surely starting to gain a following.

The Object of Live Baccarat

When playing live dealer baccarat, there are only two choices to make when betting on a hand. You can choose to bet on either the Banker’s hand or the player’s hand, hoping that the hand that you chose is closer to “nine” than the other hand.

After making your decision and then placing your bet, there is nothing else that you will need to do besides playing the hand out to see who wins.

Although there are some very complicated rules as to when the Player or Banker will draw a third card, it is not altogether necessary to be familiar with those rules in order to play.

There are many different versions of baccarat available to play in casinos, whether playing online or in land-based casinos throughout the world.

Chemin De Fer, Baccarat Banque, Mini-Baccarat, and Nevada style Baccarat are some examples of the types of baccarat that can be found. While all of these games are basically played the same, there are some variations with the table layout and with the dealers in each of these styles of baccarat.

The most common form of live dealer baccarat that you will find online today is called “Punto Banco”, which is also called American style or Nevada style baccarat.

Founded in Cuba where it was played in Havana’s Capri Casino in the 1950s, the game came to the United States and gained popularity in the Nevada casinos.

Played on a table very similar to the blackjack table, this is a faster-paced game than it’s European counterparts. While this style of baccarat lacks the “high roller” perks and allure, with its small house edge, it is better than most options that are available in today’s casinos.

Mini-Baccarat is played much like American Baccarat without all of the rituals that surround the game. It is played on a blackjack-size table, and the dealer is in charge of dealing the cards, not the players.

The players are only offered to cut the cards, much like when playing blackjack. Bettors can play on the Bank hand, the Player hand, or the Tie bet. There are no options to “draw” or “stand”, and the third card draws must follow the preset rules of play.

Chemin de Fer has gained much popularity in Europe, and while the game has a lot of the same rules, there are some very distinct differences in this version of baccarat.

The dealer is initially decided by auction, and the deal moves around the table at the end of each round. All of the players are expected to know the rules of drawing and standing when playing the game.

Unlike other versions of baccarat, if a natural is not dealt, the player’s cards are kept face down until the bank completes their play. After the player has played on their hand, the bank turns over the cards and then plays according to the Bank rules for drawing or standing.

If the “dealer” is unsure about when to draw or stand, then they should confer with the Caller for clarification.

Baccarat Banque is played on a two-sided layout, with room for two Player positions on each side. The spots are manned by bettors who oppose the bank, and each Player position is played as a separate hand against the bank. The Player hand is concealed until the bank has played out their hand.

The player has one additional option for drawing the third card in Baccarat Banque. When the initial two cards have a total of 5 points, the player has the option to draw or to stand.

This decision is made by the bettor who has the largest total bet on the respective Player position.

The Banker is not bound by third card drawing rules, giving the Bank position the freedom to stand or draw at the discretion of the dealer.

Tout la Va is a no-limit form of Baccarat Banque.

How to Bet at Live Dealer Baccarat?

Betting at the Baccarat table is very simple, and to be honest, it is really the only decision that you will make while playing the game.

The only three wagering choices that you have in baccarat are the Player hand, the Banker hand, or of course the Tie bet.

You must place your bets before the cards are dealt, and then the betting process is done.

Unlike in the game of blackjack, there are no split bets or double down bets to be concerned with during the game.

While there are advantages and disadvantages to each bet on the table, the difference in the house edge between the Banker hand and the Player hand is so slight that normally it should not be the determining factor when deciding on where to place your wager.

The winning bet on the Bankers hand pays out even money, but the house usually collects a commission of 5 per cent on this winning bet.

There is a 50.7 probability that the Banker’s hand will win, which means that even with the 5 per cent commission you will still be slightly more likely to win while betting on the Bankers hand than you would betting on the Players hand.

The only exception to this if you are lucky enough to find a casino that only collects a commission of 4 per cent.

This lower commission would make the Bankers hand a better choice to wager on that the Players hand.

If however the commission is set at 6 per cent, then you are better off playing on the Players hand.

The Tie bet in baccarat is much like the insurance bet in blackjack. In other words, it is considered to be a sucker bet.

Although the bets usually pay eight to one, the house edge on this bet is over fourteen per cent, which is huge compared to the small house edges on the Player and Banker bets.

Even if you were to happen to find a casino that pays out at a rate of nine to one on the Tie bet, the house edge is still almost five per cent.

The most important thing that can be said about this bet is to STAY AWAY FROM THE TIE BET!

You will find a lot of differing opinions on most subjects in the gambling circuits, but the experts all agree on this one point.

So, once more, it is never a good idea to place money on the Tie bet (unless, of course, you own the casino that you are playing in!).

While there is no decision making for the players during a game of baccarat, there can be some strategy involved while making the decision on where exactly to place your bets.

Looking at all of the factors involved in the game, you can determine the house edge on each hand and then place your bets where it makes the most sense.

For example, when you factor in ties and the 5% commission on the winning Banker bets, you will find that the house edge on the Player wagers is 1.24%, on the Banker wagers is 1.06%, and on the Tie wager is 14.36%.

Looking at each of these, it is apparent that the Banker bet is slightly better than the Player bet, and that both are by far better than the Tie bet. With an almost 14.5 per cent house edge on the Tie wager, you can be sure that this is a sucker bet and should be avoided.

Even if the table pays nine to one on the Tie bet, the house edge is still a rather high 4.84%. Although better than the awful 14 per cent, the Tie bet is still a poor choice when compared to the low house edge of the Player and Banker bets.

While the Banker wager is better than the Player wager, the difference is very slight and should not be the deciding factor in which spot to play.

Sometimes it is fun to just go with your gut feelings, and with the low house edges that you find in the Player and Banker wagers, you can do just that.

The only exception to this is when the commission is only 4 per cent. This lower commission reduces the house advantage to 0.6%, making the smart play to be on the Banker bet every time.

In the game of baccarat, there are no decisions during the game on whether to “hit” or “stand”, nor are there any opportunities to increase your bet once the play begins.

Therefore, once the bets are placed and the cards are dealt, there is virtually nothing that you can do (or not do) to affect the outcome of the game.

Even if you counted the cards and knew what the remaining cards were, this knowledge doesn’t affect the odds of either the Players hand or the Bankers hand.

Counting cards would be of no use to you and is just not worth the trouble.

A lot of Baccarat players like to look for predictable patterns in the game to help determine where to place their wagers.

Most will keep a “scorecard” which is used to keep track of the winning progressions in the game.

You will even find that a lot of brick and mortar casinos will supply the paper and pencils for their players at the table.

While there is no statistical basis for finding predictable patterns, looking for them can’t hurt. So, if it makes the game more fun for you, then go for it!

The game of baccarat, as a rule, is a fairly good bet with the low house advantage and easy pace.

Counting cards or looking for patterns won’t affect the odds of the game, but neither will it hurt to do so.

The object of the game is to have fun, so if you find that keeping track of the winning hands will add to your fun factor, then, by all means, do so!