Big Time Gaming brings you the atmosphere of shire with a megaways slot!

Claim your bonuses now and start your adventure through the village of riches!
Play 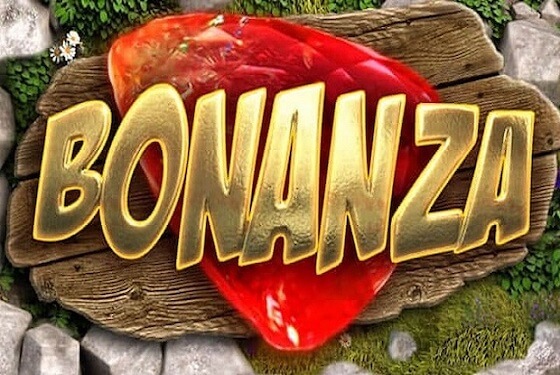 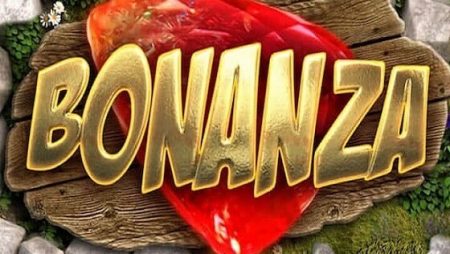 Pros
Wonderful use of the Megaways engine

That banjo soundtrack!
Cons
A jackpot would fit perfectly

It’s time to join bountiful hunting for precious stone down the mine that is the Bonanza slot from Big Time Gaming. Grab the pickaxes, helmets, and dynamite and get ready to grab riches in the form of both stones and casino wins.

Thanks to the megaways engine license that Big Time Gaming holds, the Bonanza slot can afford to have all sorts of unique features it allows. Starting by having a gameboard comprised of 6 reels and 6 rows with a 7th, shorter row laying at the top. A massive 117,000 paylines run through it ready to constantly deliver your winnings.

The Bonanza Slot’s RTP rate sits firmly in an average 96%, with a betting range that goes from €0.20 up to €20. The game also has the megaways engine staples features of cascading reels and free spins with multipliers.

While going down a mineshaft to dig out precious metal is completely possible in most parts of the world, it’s an act better left to professionals.

Instead, why don’t enter a casino site like the ones we recommend and have the slot experience that lets you enjoy all your winnings.

As mentioned, the theme leans definitively into the mine and mining of precious stone with an almost Indiana Jones-like adventure feel. The icons on the reels are then, predictably, precious stones which are emeralds, sapphires, rubies, and amethysts are your high paying icons here.

The wild is the three sticks of dynamite bundled together and with ‘Wild’ written across. And the scatter are four different golden letters that spell out the word ‘GOLD’. The icons on the 7th, shorter reel also contribute to the theme since they are mine carts that move horizontally in each spin. Also, it’s the fantastic soundtrack featuring a powerful banjo riff, absolutely one of the best slot soundtracks. 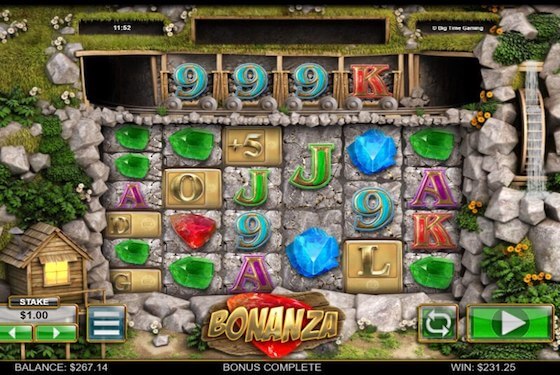 One thing you’d immediately notice with just looking at the gameboard is that the Bonanza real has a 7th, shorter row over reels 2 to 5. This is a horizontal reel which symbols will also play on the combinations that happen on the reels beneath them. Thus, expanding the winning combinations possible considerably. Also, it is in this reel and this reel only where you’ll see Bonanza’s wilds appear.

The Bonanza slot features cascading reels, otherwise known as reactions on the game itself. Every time you hit a winning combination, the symbols involved will glow and explode, evaporating from the gameboard. Thus, leaving empty spaces for new symbols to fill out which fall out from in less than a second after the reaction happens.

Bonanza features four scatters in the form of letters that spell out the word ‘GOLD’. Land these four precious letters on the reels and gain entrance to the game’s free spin round. In there, you will get 12 free spins to do away with the chance of landing another 5 or 10 if you hit 3 or 4 gold bar scatters during it. Finally, there’s an unlimited win multiplier that comes into play during the free spins. Each and every time you hit a combination, the multiplier increases and, thus, enhances your winnings.

Bonanza is one of the most popular slot games up to this day, and it’s easy to see why at first spin. The use of the megaways engine along with clever dynamics, nice visuals, and an awesome soundtrack hits all the right spots. The Bonanza slot is undoubtedly what video slot players seek and a showcase of what video slots can do.