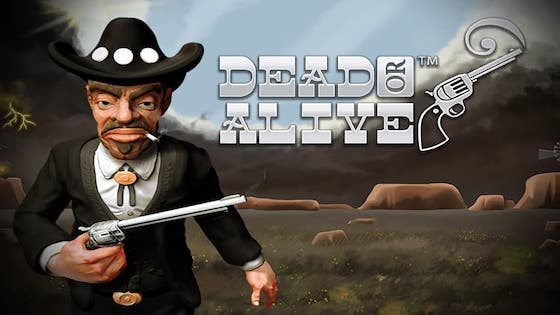 Lock up those pistols, strap those holsters on, and don’t forget to put your bandoleer because we are going wild west with the Dead Or Alive slot. One of acclaimed developer NetEnt’s first hit slot games, Dead or Alive is a classic released back in 2009 that rides on to this very day.

And how could it not, the game is a dearly beloved by video slot enthusiast since the first time why gave it a spin thanks to its big bounties. Indeed, the possible wins that Dead Or Alive can afford surely rival any booty and loot wild west outlaws were eager to get their hands on.

The game might be old, but just like its American wild west culture-theme, it has aged just fine.

The Dead or Alive Slot’s  RTP

Featuring the classic and rather basic by today’s standards 5 reels and 3 rows setup on its board. It also is evidently generous to its player across its 9 paylines, with the Dead or Alive slot RTP rate standing at 96.82%.

Players can set their stakes as low as €0.09 to €18 and, just like the wild west, the more they risk the more they stand to win. The high volatility of Dead Or Alive means that high payouts happen less often than other games. But when they happen, they can reach as high as 12,000x your initial stake, how’s that for a bounty?

The Dead or Alive Slot Sites

No need to ride your trusty steed unto the next desert town in the middle of nowhere to have a shot at these winnings. You can enjoy Dead or Alive by sign in the following recommended casino sites.

As if you need any reminder if you’ve been reading this far, we’ll say it again for the sake of clarity: Dead or Alive is a Wild West-themed slot. Apparent since the fist second it loads up, the game board is in front of an old west desert landscape.

Rocky cliffs, an oil lamp, an iconic rotating grey handpump, and a storm looming by set the mood here. On the board itself, the higher value icons are classic wild west paraphernalia. Cowboy boots, a pair of whiskey glasses, a holstered pistol, a cowboy hat, and sheriff badge keep in line with the theme.

But the two icons you want to be in the lookout for are the wanted poster, which acts as the wild, and the pair of crossed revolvers, which is the scatter.

Dead or Alive is by no means jam-packed with features. In fact, is one of the most bare-bones offers in that regard. But what it does offer, it offers massive.

Watch out for the scatters, landing up three or more on them will trigger the main attraction of the game, the free spins.

Once attained, the player receives 12 free spins from the game, with a chance to re-trigger them only once. Here, wilds are your best friends, they won’t leave you easily! In fact, they stick around.

Filling a payline with only wilds multiplies your winning 333s you stake and there are 9 possible paylines to fill. That’s quite the loot, I’d say. Additionally, landing a reel full of wilds awards you five extra free spins.

Dead or Alive Slot– The Verdict

Do not let its age misguide you, there is a reason why the wild west themed Dead or Alive lost remains as popular as in the days of old. The bounties NetEnt’s classic offers are still sought after and its simplicity encourages rather than repels players from it. This is a wild ride you don’t want to miss.