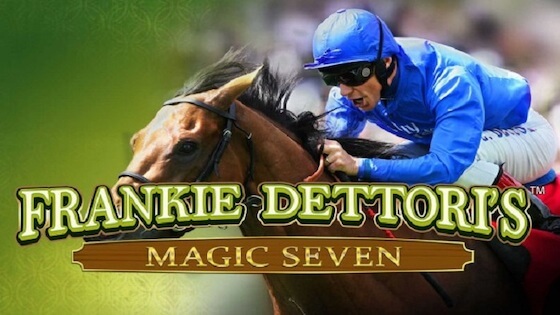 A jockey's life full of risks and big rewards. Frankie Dettori is no different than any other one. Join him now with a handful of bonuses waiting for you! Play Now
Game Provider:
Playtech
RTP:
96%
Free Spins:
15
Volatility:
Medium
Rating:

The Frankie Dettori’s Magic Seven Slot by Playtech is a top-notch slot that will impress you from the beginning. It plays homage to a horse racing legend with an endearing theme based around him. Choosing a jockey as the subject of the game either reveals the tastes of higherups at Playtech or heeds the rumours about Frankie and his gambling.

Either way, this fateful tribute to a sportsman has a few notable features. Moreover, a juicy jackpot accompanies them with a 7.777x. A reference to Frankie’s winning the seven races at a competition at Ascot in 1996 and the actual reason for the game’s title as well.

Featuring the standard 5 reels with 3 rows setup on its board along with 25 active paylines across. The Frankie Dettori’s Magic Seven Slot’s RTP sits firmly at 96% with a betting range going from €0.25 on the low and €125 as the ceiling.

You can always go to Ascot to bet and enjoy a day at the races! Or, if you rather win a bit from anywhere in the world any time, enter one casino site from our list and enjoy the Frankie Dettori’s Magic Seven slot.

Since our man Frankie Dettori is a horse jockey, his game could not be about anything else but horseracing. And indeed, the theme reflects that. The gameboard has a barely visible green pasture race track with fences as a background image.

The high-paying icons on the reels are a horseshoe, a trophy, a circular sign, and two different pictures of Frankie in action. The Frankie with a beaming smile is the game’s wild and the game’s logo is the scatter. Also, an aerial view of Ascot stadium functions as the bonus icon.

The Frankie Dettori’s Magic Seven slot features a bonus feature that you can trigger by landing three or more scatters. The scatters are an aerial view of a horse racetrack which happens to be a rendition of the Ascot Racecourse in the UK.

The bonus feature is a simple Pick and Click the game in which a race track with several clickable squares appears on the screen. Simply, and as the name suggest, do pick and click on the squares to reveal cash prizes and trophies with progressive multipliers. If you get a ‘collect’ icon when turning the squares, the feature ends and you get whatever prices you got so far. Choose wisely.

Finally, you can win a jackpot of a staggering 7,777x your stake. All you need to do is manage to land 5 Frankie wilds on the same payline.

This is a point and clicks feature where a set of horses will show up on the screen, simply point a click on one, and they are off to the races.

If the one you choose actually crosses the finishing line first, you will get an unbelievable amount of 35 free spins to have your way with.

Alternatively, the game gives out 15 free spins to you if your horse got there in 2nd place, or 10 free spins for the 3rd place.

The free spins, unfortunately, cannot retrigger in any way ad the feature unfolds. But, the game places an extra number of scatters and wilds to appear during it as a way to notably boost your winnings. Finally, there’s a betting feature also active at the end of the free spin round. During that, you can wager half or all of the total winnings to increase them.

The theme undoubtedly will appear boring to all but the real fans of horseracing. But players come here for the winnings. And thanks to the amazingly generous free spin features, they came to the right place with this slot. Enjoy your day at the races and keep an eye out for your price.