Exploring the mines of Eldorado has never been more fun before.

Join Gonzo, the relentless miner, and get big prize with golden bonuses!
Play 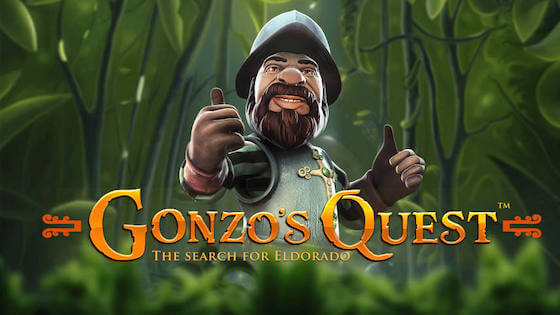 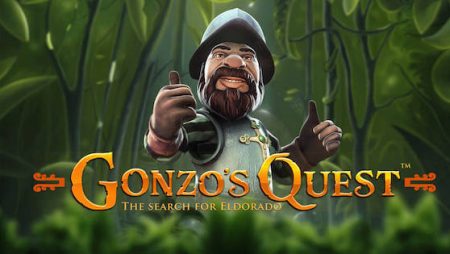 Join the original reach for the City of Gold, make your way across the jungle in search of unbelievable riches in the Gonzo’s Quest slot. Go with the famous Spanish conquistador, or rather, his friendlier 3D animated counterpart in his journey. Ever wondered what it is like to search for the unknown? Wonder no more.

A successful quest starts with a promise, a promise of the right incentives that is. Gonzo’s Quest doesn’t fall short in that regard in the slightest thanks to its RTP rate of 96%, standard for NetEnt’s games. A usual 5 reels and 3 rows gameboard enabled with 20 active paylines is where the action happens.

The betting range goes conservatively from €0.20 to €50 but, through libertine use of the multipliers, you can win up to 37,000x your stake. Talk about striking gold in the jungle.

Exploring undiscovered lands was exciting for adventurous conquistadores a couple of centuries ago. We understand how it can be a rather daunting task to do so in our more civil society, so we don’t encourage it. Rather, we suggest you simulate the excitement by playing Gonzo’s Quest in any of the following casino sites.

The game starts with a nice, brief animation of Gonzo setting out into his adventure to set the mood, a rather well-done addition. Once playing, the gameboard sits in front of a shining Inca pyramid made out of gold, obscuring it from Gonzo’s sight. Gonzo himself is present on the left side, watching you and celebrating each time you land some gold for him. A rather comfy position, is it not?

On the gameboard, the reels’ icons are all stone craving representing different animals and objects. A snake, bird, alligator, and fish for the animals, and fire, moon, and heath for the more esoteric concepts. Don’t worry if they are difficult to tell apart from one another; each one has an exclusive colour for that purpose.

There are two other icons your focus should be upon. First, a gold and silver question mark that acts as the Wild of the game.

Second, a gold Inca stone craved face sticking its tongue out that is the ‘Free Fall’ or ‘Free Spin’ scatter. 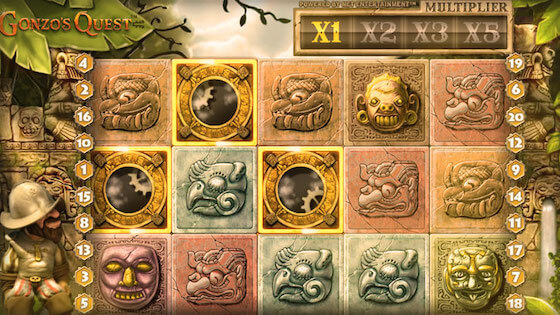 Gonzo’s Quest has the distinction of being the very first NetEnt game to feature the Avalanche mechanic. Better known nowadays as the ‘cascading reels’, the mechanic causes icons of winning combinations to explode. Once gone, the free spaces are immediately filled by a new icon falling from above.

The cascading icons revolutionized what was possible in a game, increasing the dynamic of combination. So, Gonzo was not only a conquistador in real life but also a pioneer in online video slot games, if only once could tell him.

The ‘Free Fall’ scatter icons trigger the ‘Free Fall Feature’ that is actually the game’s free spin feature by another name. Landing thee consecutive scatters on the reels triggers the bonus. On it, you receive 10 free spins and increasing multipliers each time you hit a winning combination. The multipliers go from x3 to x15, and you can keep track of them on the upper right corner of the screen.

If you’ve been playing video slots for a while, you’ve stumbled upon many games with avalanche mechanics/cascading reels. However, you must know that all of those games owe it to Gonzo’s Quest for pioneering the feature.

Indeed, he might not have reached the City of Gold, but he struck gold for online gamblers and developers alike with it. Finally, Gonzo’s Quest is so solid of an offering that, to this day, is still one of the top NetEnt products around. Ask any seasoned slot player, they’ll tell you they hold a special place for Gonzo’s Quest.