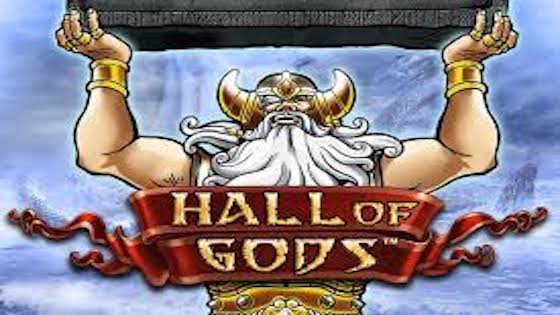 Across 5 reels, 3 rows and 20 paylines gameboard, the Hall of Gods Slot’s RTP rate is a slightly below average at 95.50%. The betting range sits in the mid-range going from €0.20 on the lowest end up to €50 as the max. However, the real draw for the game is, of course, its progressive jackpot.

Instead of trying to figure out your way to get to Asgard and Valhalla, log into one of the well-known casino sites to get to the Hall of Gods and spin away.

Firmly rooted in the Norse mythology, the gameboard sits in front of background image detailing a Viking longship facing a large dragon-like creature. The Viking being, of course, the most famous followers of the Norse deities which, by the way, are here too.

The high-paying icons of the game are the Norse gods Idun, Freya, Loki, Thor, And Odin. Lower-paying icons are also Nordic symbols: Norse rings, mallets and ornaments, Viking axes, and a chest full of apples.

The wild of the game is Jörmungandr, a large dragon-like serpent and mythical Norse creature. Besides, the scatter is Huginn and Muninn, a pair of raven belonging to Odin standing in front of the full moon.

Finally, there’s a bonus symbol in the form of Thor’s hammer which gives you access to the bonus round that awards the Jackpots.

The Hall of The Gods slot wilds, represented by the giant serpent of the realm of Midgard Jörmungandr, are expanding wild. Thus, in a truly epic fashion fitting to the size od this mythological beast, the wild expands to covers the whole reel it shows up.

Due to this, wild only appears in the 2nd, 3rd, and 4th reels of the board. So, if you happen to land one wild in each of those reels, you would get 3 wild reels that would form numerous combinations and a massive, epic payout.

Also, Hall Of God is a progressive jackpot game, and thus, there’s a Bonus Game where you get the chance to have a shot at winning one of the three jackpots. To trigger it, land 3 Mjölnir icons with ‘Bonus’ written across. Once it starts, all the 15 icons on the whole board transform in Viking shields.

On the other hand, the shields hide different rewards behind them. luckily for you, you got Thor’s hammer, Mjölnir, which no shield ca hope to withstand. Simply point and click a shield to shatter it and reveal what’s behind. At this point, the rewards are either coin values or three different jewel Jackpot symbols reading ‘Mini’, ‘Midi’, and ‘Mega’.

Match three of the same kind to claim the corresponding jackpot, the Mega jackpot being the one to regularly reach past the million-dollar mark. This feature can also happen during the free spin bonus.

Get three or more scatters of Huginn and Muninn, the twin ravens standing in front of the moon, anywhere on the reels to trigger the free spins. The games bless you with 10,15, or 20 free spins for Hall of Gods’ free spins round depending on how many crows scatters you triggered it with. Every win here gets a 3x multiplier. Moreover, the expanding wilds keep active and landing three more scatters gives you more free spins.

Hall of Gods Slot – The Verdict

While the visuals of the game definitively give away the fact that it came out in 2010, its big draw, the progressive jackpot, remains as fine as ever. To this day, jackpot seekers still are drawn to the Hall of the Gods slot, for the possible riches are worth it. NetEnt has done a classy job, once again.