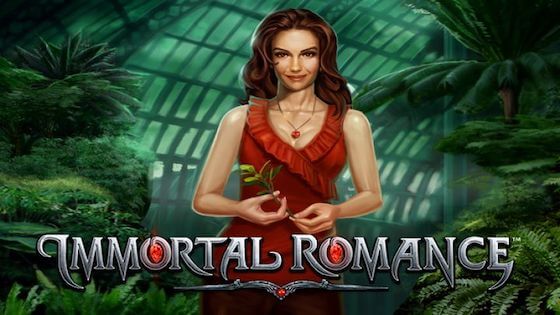 Who says every love has an end? In Immortal Romance, Microgaming depicts its infinite love for online slots. If you feel as the provider does, why don't you claim your bonuses now and start your love story? Play Now
Game Provider:
Microgaming
RTP:
96.86%
Free Spins:
10
Volatility:
High
Rating:

Looking for that love that never dies? Better go hook up with a vampire then! Or, alternatively, you can live out an intriguing love story through the character of Microgaming’s Immortal Romance slot game. Though it came out as far back as 2011, slot fans rank Immortal Romance on their favourites’ list highly to this day.

And who could blame them? The game took a page from the popular entertainment properties that featured vampires plaguing the media at the time. Similarities with The Vampire Diaries and True Blood (but definitively not Twilight) are not a coincidence.

We’ll get further into thematic choices in a bit, let’s talk about technical aspects instead. Our deridingly dark gothic Immortal Romance slot’s RTP rate is a high 96.86%, a common number for those familiar with Microgaming. The 5 reels 3 rows gameboard has 243 different paylines enabled to deliver your winnings.

The actual bet range for Immortal Romance definitively lies on the conservative side, ranging only from €0.30 to only €6 max. Do not let this discourage you from venturing into the dark night. Fate rewards the bold in Immortal Romance with ample winning multipliers. Lastly, this adventure packs many special features.

No need to move to some Midwestern USA middle-of-nowhere rural town of those vampires seem to favour. Try any of the following casino sites below to play Immortal Romance instead.

The theme and mood of the game are properly dark and gothic with a modern touch. The lower value icons made up of letters and numbers properly reflect this being of bold gothic font.

The four high-value icons are your four main characters. All drawn in the aesthetic of modern vampires: handsome and mysterious. A candlelit scene of a book and quilt and a gothic castle landscape complete in the mix of high-value icons.

The wild of the game is the logo of it, silver letters that read ‘Immortal Romance’ on them. Lastly and more importantly, the scatter is a properly gothic door knocker with the shape of a lion, talk about classy taste. The game’s soundtrack is also notable with eerie dark tunes that blend perfectly with each action on the screen.

Immortal Romance is choke-full of special features, all of which can largely increase your winnings.

First of all, special mention to the fact that the game features an actual backstory, something rarely seen in slot games.

Seriously, Microgaming actually has writers. And they appear to dig the adult vampire genre a little too much, given its characters fleshed out backgrounds. You can’t ever deny the influence of vampire pop here after learning them, a major draw for genre lovers.

Regarding the gameplay itself, Immortal Romance offers you the lustful named ‘Wild Desire’ feature. Triggered at random, wild desire instantly fills any number of your five reels full of wild symbols and let you give it a free spin. Through wild desire, you can potentially achieve 12,000x winnings on your stake.

Here’s where the real blood to quench your vampiric thirst. It’s at regarding the special features of Immortal Romance.

The free spin bonus of Immortal Romance goes by the name ‘Chamber of Spins’, and it triggers at the landing of three or more Scatters.

As a tip, out of all the different free spins options, it is Michael’s the one that regularly gives out above-average winnings.

It’s not hard to see why, after close to a decade later, Immortal Romance is still a popular slot choice. Real love went into crafting this homage to pop vampire flicks, with even a backstory to match the genre. But it would be nothing if the potential winning were not as big as they are.

If you were a vampire and had to choose between subsisting on blood or slot winnings, you wouldn’t ever be hungry choosing Immortal Romance.