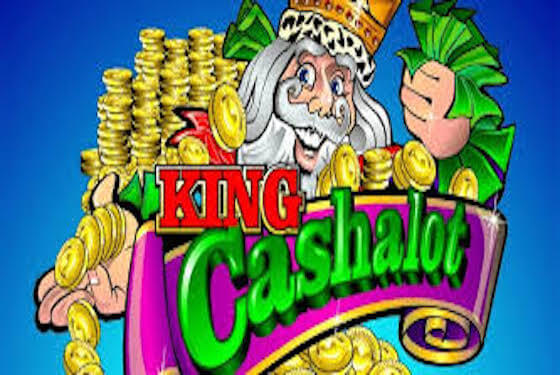 Out from a very distant past, theme-wise and real world-wise as well, comes the King Cashalot slot from Microgaming. Based on an absolutely bad pun of replacing ‘Camelot’ for ‘Cashalot’, the game looks as campy as its name suggests. But one thing about it surely is serious, its progressive jackpot.

The game’s most salient icon and part of his look is a contented-looking king clad in gold. He is, apparently, also a very greedy king as well since King Cashalot Slot’s RTP rate ranks in a very low at 91% which is unbelievable for modern video slots. However, this is likely a product releasing way back in 2004.

Anyways, it features a 5 reels and 3 rows board with 9 paylines enabled and a large betting range from €0.05 on the low and €225 as the ceiling. The game has almost no special features besides the one that counts, the progressive jackpot.

No need to make it to the court of a greedy king, although that might be doable even in our days. Instead, try your luck spinning the King Cashalot slot at these casino sites.

The theme is undeniably medieval debauchery from a wealthy ruler. The lower paying icons are all sorts of banquet-tier dishes. Meanwhile, a princess, a prince clad in an obscenely looking gold armour, a queen, and a king that also doubles as the wild are the high-paying ones.

The game features a scatter in the form of a jester icon even though there are no free spin and a bonus symbol of a golden dragon. The drawing style itself is definitely cartoonish of the lower quality variety, which fits well with its overall campy looks.

The King Cashalot slot has actually very few features, which is odd given the ostentatiousness of the game’s theme. A case of being excessively greedy and penny-pinching, your Majesty?

First of all, in the very fortunate case you should land three golden dragon bonus icons, which are quite rare, you would trigger the Treasure Bonus. In there, the game will give present you eight different treasure chests of which you can choose only one. Click it to reveal its contents, a cash prize and end the feature.

You ultimately got the option to collect this prize or discard it to take up to two more chances to choose another chest. Beware that if you discard two prizes from opened chests to select the third one, that’ll be the prize you get, and the feature concludes.

Finally, there is the big one. The King Cashalot progressive jackpot is the major reason why this game is still played. As with any progressive jackpot it draws from little percentages taken from the bet of each and every player of the game. Think of its kind of like the taxes the King has extracted from its subjects, but taken without the threat of lethal force of course.

The King Cashalot progressive jackpot lives up to the high net worth implied by the name, usually raking over the million-dollar mark. To be able to get it you need to line up three king wilds in a winning combination across the 9th payline of the game. For reference, the 9th payline runs from the two bottoms left reel spaces, passing through the centre of the board and over the two top right ones.

There might be a scatter represented by the jester icon, and it might be able to give some winning, however meagre they are. Nevertheless, there is actually no King Cashalot free spin feature. The only real special feature besides the Progressive Jackpot of the game it’s the aforementioned Pick and Click game.

King Cashalot slot is starving for features and looks unsatisfying with a visual style that hurts the eyes. The only reason people play King Cashalot Slot still is for its progressive jackpot. If you are a fan of rewarding jackpots, have a go at this game but be mindful of the low RTP rate.