Building your first monopole is a few spin away. Try BTG's incredible slot and get it immediately. 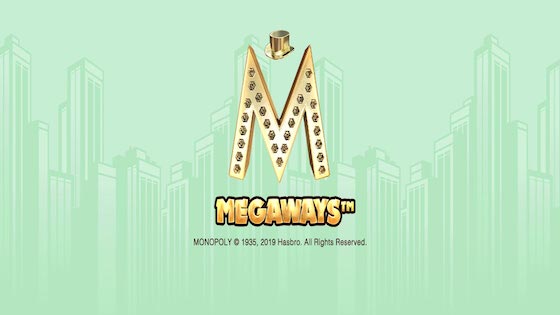 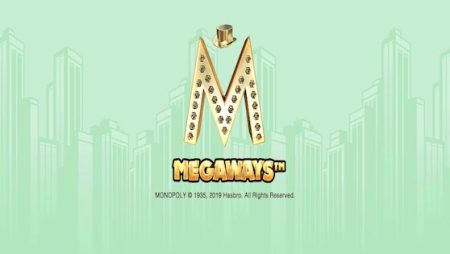 As the iconic cultural phenomenon that it has been for decades now, Monopoly has a warm place in the hearts of casual gamers and serious gamblers alike.

Not for nothing, it is one of the most sought-after household names to create branded games from. But rest assured, the Monopoly Megaways slot game is anything but another run of the mill game based on the property.

Featuring 117,649 paylines,  known here as ‘ways to win’ or ‘Megaways to win’. The monopoly Megaways slot has an RTP rate of 96.39% which, thanks to his impressive number of features, makes a 15000x prize possible.

All around the world, there are properties to develop and utility providers up for purchase. Such is the deal with capital, and here are the casino sites that allow you to have a go at building your own monopoly.

As it could not have been otherwise, the game’s palette and aesthetics come directly from the monopoly game board. And how could it not? The Monopoly game board itself appears as well in the lower half of the screen.

The reels also feature the iconic monopoly game pieces: top hat, dog, car, and gunboat are all here as the icons. A golden capital ‘M’ for ‘Monopoly’ represents the wild of the game.

Right off the bat when starting the game, the player can see that the 6 reels and 6 rows gameboard is full of icons. Some of them appear larger than normal after a spin. This is due to Monopoly Megaways slot has Big Time Gaming’s own megaways engine.

The particular engine affects how many icons appear on the screen during each spin and how they spread out across the rows. How? Some icons can occupy two and even three-row spaces! That’s right, one or many icons can stretch vertically to cover more ground, making it as if there were two or three of the same piled up.

The great thing about this is just how perfectly random they appear. Each spin places new icons of varying sizes spread out across. Thus, it allows the possibility of landing many more combinations on each spin.

But that’s just the tip of the iceberg. Monopoly Megaways slot has quite a number of features that make those 15000x winnings possible. As stated, there are quite a lot of them; you might want to grab some pen and paper for this one. Kidding, they are easy to intuit once you play. 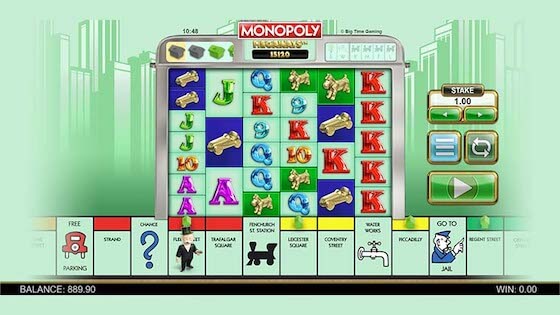 Once again, Big Time Gaming outdid themselves with the sheer number of different features included here. First of all, the Reactions feature and the cascading reels are the central features all others orbit around.

Once the reel spins and the player hits a winning combination across the paylines, many things will happen.

First, the winning combinations of icons will go away, making room for a new set to take their place. Second, Mr Monopoly himself will react by moving across the strip of the monopoly game board located below.

He’ll stop at one of the oh-so-familiar squares of the monopoly board which, just like in the original game, have their very own effects.

The effects of each particular square are the following.

The combination of all of them is what makes the 15000x winnings possible.

The free spin of the Monopoly Megaways slot game triggers when you achieve the 5th house on a property square or a chance square awards it. Whichever way you receive it, you’ll have 8 free spins where it pays to have all those houses built on your properties.

Each time Mr Monopoly lands on a property you’ve populated with houses, you’ll receive a multiplier on your winnings according to how many houses.

Also, landing on any train station previously owned gets you +1 free spin.

Likewise, when landing on a utility, you get 1x win multiplier for each utility owned (owning both means 2x!).

The chance and community squares also remain active with the same effects they have in a normal round of the game.

I would personally describe the free spin features of the Monopoly Megaways as putting the whole game on steroids. Really, there are few other ways to describe how supercharged it becomes; all involve narcotics also.

Remember that after the free spin bonus ends, you will lose ownership of all train stations and utilities previously had. The houses on your properties, however, remain, ready to award you your next free spin bonus.

The sheer number of possible combinations. The genius idea of incorporating the squares of the Monopoly gameboard. And the incredibly varied effects afforded inside and outside the free spin bonus.

All powered by an unpredictable but wildly generous megaways engine that can land players some incredible wins. Last but not least, the charm of Monopoly is something so endearing for iGaming lovers; it wins them in sentimentality alone.

In a nutshell, Big Time Gaming did well again with the monopoly Megaways slot.