Get your free spins in the battlefield and conquer the continent with Napoleon today!
Play 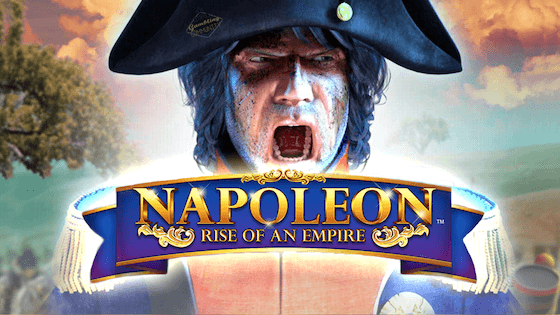 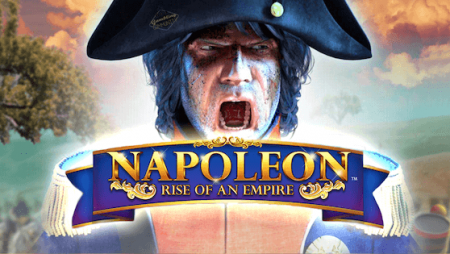 Military mastermind Napoleon Bonaparte used to spin the wheel often and win almost all of his battles. Now, with the Napoleon slot game, you can spin the reels and win alongside one of history’s most successful figures.

His ambition led Napoleon Bonaparte to brave and dare expand his empire across all of Europe. And now, he is coming to conquer your slot game experience as well.

Rarely history has seen an individual level of ambition larger than French general and later Emperor Napoleon Bonaparte’s. Going from a minor and modest noble family to army officer and then seizing the chaos of the French Revolution to quickly become general.

What followed was one of the most spectacularly rapid expansions of power and influence within a country and beyond its borders. Establishing and enlarging an empire via many successful military campaigns before age 50 are epic wins.

So many wins made up large parts of Napoleon’s life that, in fact, it is not even surprising that Blueprint Gaming selected him for one of their slot games. The Napoleon slot game by Blueprint Gaming, Napoleon: Rise of an Empire, is here to inspire you to win big like the man himself.

Just like he did in life, Napoleon expands its gambling presence across many several battlefields. Battlefields that come in the form of many casino sites, of course. Thus, no dead bodies will be piling up on your path towards glorious winnings, Napoleon would be jealous… or not. Here, you can check some of the casinos I recommend you to check for Napoleon slot.

Made up of a game table that features 5 reels across 3 different rows, the napoleon slot game counts with 20 different pay lines scattered across. More importantly for you as a player, the Napoleon slot game RTP rate is an excellent 95.96%. So, to the victor (you) go practically all of the spoils!

Right out from its epic introductory animation players get what the game is all about: winning by beating the odds. And what better way to frame that than with an epic animated cutscene of a field full of 19th-century armed soldiers ready to win or die trying?

A glimpse of the crowded men in uniform, mounted horses, swords, cannons, and tattered banners set the stage. To not even mention the suitably haunting 19th-century European music-inspired marching background song. All are there to help you dive in the mood when spinning the reels. 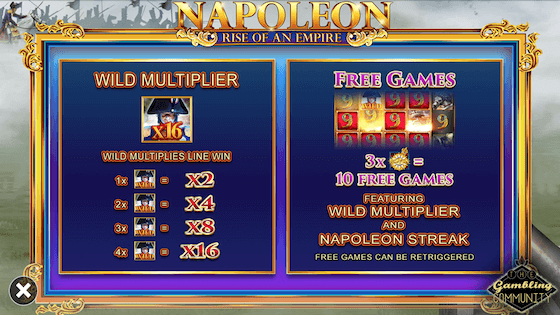 As the setting demands, the artistic choices made by the developers of Blueprint Gaming also rise to the challenge, even in the reels. Icons that roll across the five available reels in Blueprint Gaming’s Napoleon: Rise of an Empire are Army-inspired. 19th-century army-inspired, particularly. Among them are:

But, without a doubt, the most iconic icon of them all has got to be general Napoleon Bonaparte himself. The provider depicted him as a long-haired, bicorne hat-wearing, war-hardened man with a steely, sombre gaze. Napoleon suitably represents the very own wild of his own slot game, with an appearance to match, no less. And he also comes with some impressive effects.

Fitting to his role as a battlefield commander, occasionally the Napoleon icons, which are the wilds of the game, will let out a howling battle cry. And it is not just for show, the battle cry denotes two possible effects happening on the gaming table. It will instantly add a number of either scatters or more wilds into the reels, replacing other symbols currently there.

The napoleon wild also can, of course, replace any other symbol to form a pay line except the scatter, which here is an imposing crown. Finally, the napoleon wild acts as a multiplier wild. One will double your winnings, but intertwining more will get you even more, 2x, 4x, 8x, and impressively, up to x16 more winnings are possible. No one will ever say that this Napoleon was a cheap miser in any way, far from it, he’s your chance at glory and riches.

By hitting 3 scatter icons in your pay lines’ crosshairs will start a bonus round which provides you with 10 free spins. During said spins, the Napoleon Streak activates. In it, all winning icons stay in place, and only the non-winning ones spin again in the following spin.

That’s right; you can re-do your winning combinations and very likely expand them further for as many spins you have left. It is here that you are most likely to have the absolutely thrilling opportunity of lining up to 4 Napoleon wilds.

Hitting those x16 winning is a blast of excitement, I write from experience since I actually did during my first time playing this game! But it was on a meagre bet of 0.20 units so… Well, it was an epic feeling nonetheless, not so much an epic pay-out.

The Napoleon Slot Game – The Verdict

All in all, the solid, moody atmosphere of a raging battlefield is more than suited for a game of chance you ardently want to win. More importantly, a generous RTP rate and multipliers make this immersive experience rewarding.

Also, if you like the thrill of winning streaks, trust me, you have to experience the x16 multiplier of a Napoleon Streak this game affords. It’s a feeling like no other!

Booongo Releases Sequel to Book of Sun
9 months ago