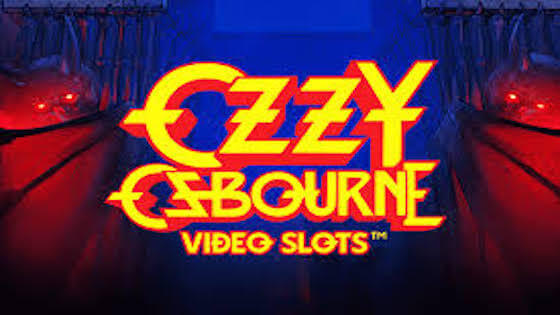 The Ozzy Osbourne video slot is damming proof that someone or the whole staff or NetEnt are diehard rock fans. Since there’s no other explanation for going to above and beyond in crafting such a unique, feature-laden slot. The game has so many feature build-in the Ozzy Osbourne himself would be at a loss for words trying to explain them.

Despite having a standard setup of 5 reels by 3 rows with 20 paylines enabled and a betting range of €0.20 to €100, it plays like anything but standard. The Ozzy Osbourne video slot’s RTP rate rests at 96.67% and so many features build-in that Ozzy himself would be at a loss for words trying to explain them.

Although it is certainly plausible to go to an Ozzy Osbourne show and whip out your phone to play this slot in such a fitting place, better not. You’d miss his show entirely. Instead, go and log in one of the casino sites we mentioned below and spin away in the Ozzy Osbourne slot machine.

The theme is appropriately dark and stylish, fitting a musician known as the Prince of Darkness for sure. The card symbols, heart, ace, diamond, and clover have heavy metal makeup featuring ravens, skulls, crosses, and black roses.

The higher paying symbols are all Ozzy Osbourne himself with different facial expressions and colours. The wild is a bat with a skull, no doubt referencing the infamous accident where Ozzy bit off the head of an actual bat.

The scatter is locomotive train facing straight at you, a clear reference for his hit song ‘Crazy Train’. Ozzy’s own greatest songs periodically paly in the background of the game, talk about ambience.

It seems like NetEnt decided to bless the Prince of Darkness here because the Ozzy Osbourne video slot is full to the brim of features.

For starters, even before you start to play the game, you must decide if you want to turn on the Bonus Bet. If you do, all of your bet’s value double but you’ll get increased multiplier values and more frequent combinations and bonuses. Now, about the other lot of features:

Re-Spin Feature: If you happen to land only 2 scatter symbols across the 1st, 3rd, or 5th reel, you get a Re-Spin free of charge. This Re-Spin also happens to trigger another feature, the Charge Up feature.

Charge Up Feature: Here is where those two extra squares on the upper left and upper right corners come into play. After a Re-Spin, the Symbol Spinner on the upper left corner spins and selects one of the game’s symbols. But that’s not all, the Feature Spinner follows spins and chooses a feature to apply to the said symbol.

The possible features to apply through the Feature Spinner are as following:

When a scatter land on the Symbol Spinner, the head of a bat automatically appears in the Feature Spinner. This will take you directly to the free spin round bypassing the usual requirements.

Triggered by either landing a bat head in the Feature Spinner or the old-fashioned way, getting 3 scatters across reels 1,3, and 5. If you chose to set on the Bonus Bet at the start of the game, you get 5 free spins, if not, then there are only 4 free spins.

The Charge Up feature continues to play during the free spins. Thus, during each spin, the symbol spinner chooses a Symbol, and the Feature Spinner gives that symbol one special effect. Were you lucky enough to land a scatter in the Symbol Spinner during the Free Spin round, you’ll get +1 free spin.

Between the many features, stylish graphics, and many timeless songs as background music, this is a love letter to Ozzy Osbourne. On top of that, the game seriously packs powerful features to supercharge your wins. Metal never was so heavy on a slot before, come on an enjoy spinning away with this icon of rock music.