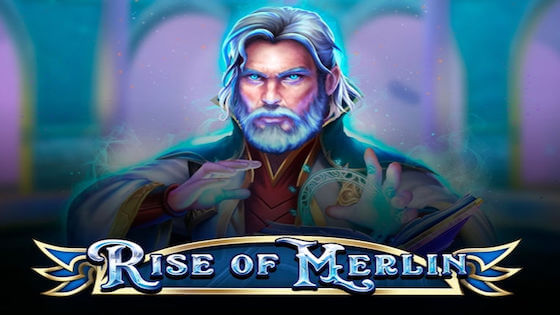 Can a developer somehow cast a spell that brings about a familiar-looking slot game? Seems like Swedish developer Play‘n Go hit the right enchantment in order to bright forward the Rise of Merlin slot game.

The magic of the legendary wizard that is a key part of the Arthurian legend now comes at your service to have you win big. The great enchanter, Merlin himself, will lend you a hand in the conquest of the reels. Talking about Rise of Merlin forcibly requires talking about its developer, Play‘n Go, and it’s rather colourful history.

Accused regularly of taking the ‘if it isn’t broken don’t change it’ rule a little bit too far. Play‘n Go often faces accusations of how similar their games are to competitors’. Not only that but even their more original offers derivative from to their own past work.

The Rise of Merlin slot itself is bound to face the same scrutiny, especially due to its similar gameplay to Book of Dead, a previous release by Play‘n Go. Those are facts, but I think King Arthur’s loyal sidekick can stand on his own in his Rise Of Merlin slot.

Needless to say, the offering does look similar to Play‘n Go’s past releases, even to some of their competitors too. Regardless, Rise of Merlin does have a couple of tricks up his robe’s magic sleeves.

The Rise Of Merlin Slot Sites

There’s no need to go to King’s Arthur court, nor his round table or Merlin’s own wizard halls to have the spell that is the Rise of Merlin slot cast. A simple visit to these casino sites will be enough for that.

As you can expect from the main subject of the game, there is a whole lot of shining, magical-looking, wizard things decorating the board. Starting with a pristine looking shrine where Merlin likely conducts his wizardry as a background. The ambience is set to delicate marching song with echoes of high fantasy films.

The icons on the reels follow a similar path. An owl, often associated with wisdom, alongside not one, but two different coloured dragons are the mid-range icons. A shining crystal ball functions as both the scatter and the wild of the game. And lastly, a serious-looking Merlin is the high-value icon of the reels.

As fitting as it is to the theme, I do find odd that there are not one but two dragons. Yes, they are a distinctive part of western fantasy and the Arthurian lore particularly, but are there not more magical creatures? Minor grip aside, their designs are good and consistent with one another.

If you have played the previously mentioned Book Of Dead, you have a pretty good idea of what it’s similarly playing successor, Rise of Merlin, has in store. It’s all about the free spins.

Triggered when you land three crystal balls across three or more reels at the same time.

Once attained, the free spin bonus of the Rise of Merlin slot awards 8 free spins to the player. But before throwing, the game will automatically select one random icon of the reels to become your expanding symbol.

What does that mean? Just like in other games with this feature, when that chosen symbol lands during one the free spins, it’ll expand to cover the whole reel. Ideally, you want Merlin to be the expanding symbol since he pays the most out of them all.

Also, during the free spin, the scatter that triggered it remains in play. Land three of them again and you can retrigger the free spin bonus again with a new set of 8 free spins.

Rise Of Merlin Slot – The Verdict

As with many titles seen before by this developer, Rise of Merlin plays it safe and does not deviate much from the familiar formula. And it works for it, enchanting fans of straightforward slots to enjoy a simple setup with high volatility and chances of up to a 500,000 prize. Don’t expect much of a complex challenge, though!