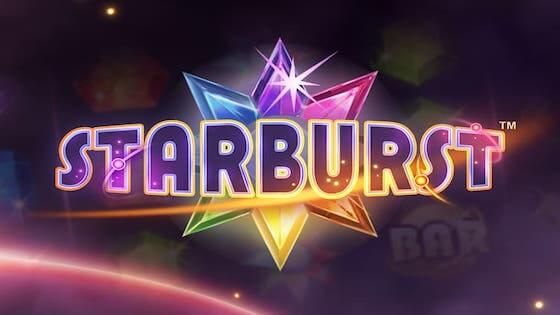 There is an intergalactic journey waiting for you on the reels of Starburst. Let's claim your bonuses and get your astronomic prizes now! Play Now
Game Provider:
Netent
RTP:
96.1%
Free Spins:
0
Volatility:
Medium
Rating:

When talking about the greatest video slots classics of all time, one name always turns up in the conversation: Starburst slot. And deservedly so, since NetEnt struck the equivalent of intergalactic gold when they released this classic back in 2012.

Why the star-themed slot that bursts with colour is the best is precisely due to a colourful presentation and generous winnings. Starburst remains to this day a staple of video slot games and the flagship title for NetEnt, a developer that has no shortage of great titles.

An intergalactic adventure must have some high stats to match, and Starburst does not disappoint in that regard. The 5 reels and 3 rows gameboard has just 10 paylines enabled to deliver your winnings. Accompanying that, The Starburst Slot’s RTP rate stands at a standard 96.1%.

Your betting range sits on an also standard range of €0.10 up to €100 which the game sole special feature can turn into a 500x win. How is that for a galactic-scale bounty?

Travelling to a galactic location high above among the stars to play this psychedelic, colourful game sounds pretty cool. But technology is not there yet, plus, there’s no air in space so that could be a bit of an issue. Instead, access the intergalactic Starburst Slot by signing in the following casino sites is pretty easy. Additionally, you will find some astronomic bonuses at some of them.

The five reels and three rows gameboard is set against a backdrop view from somewhere high in outer space. The icons on the reels similarly reflect the game’s star-faring theme. Otherworldly looking gems of different shapes and colours make up the lower value icons here.

Triangular red, four-pointed purple, diamond-shaped yellow, hexagonal green, and octagonal blue are some of them. Additionally, a number ‘7’ covering a big spherical blue object looking like planet earth and a gold sphere reading ‘BAR’ are the higher value icons.

Finally, the real, literal, star of the show is the Starburst wild. A multicoloured eight-pointed star that combines all the colour tones of the previous icons and it’s the central feature of the game.

There is no proper free spins bonus in the Starburst slot game by NetEnt. Weird that such a popular classic does not have one of the most common features of video slots? Well, Starburst does make up for it with its one and only feature, the colourful Expanding Starburst Wilds.

Its simply focused on getting a Starburst wild, these lovely icons only show up on the 2nd, 3rd, and 4th reel of the gameboard. When a single Starburst Wild appears on one of those reels, the expanding wild triggers and the wilds expand to cover the whole reel.

Effectively giving a Wild Reels exponentially increases your chances of forming winning combinations. Moreover, every time you land Expanding Starburst Wild you get a free spin and the Full Reel stays in place.

If during said free spin another Starburst Wild happens to land on any of the remaining two reels, the feature triggers yet again! If you happen to land the three full reels full of Starburst Wilds, then an x500 stake win is easily achievable for you. See, that is the reason why people adore Starburst even to this day.

Once you play it, you can’t deny it, Starburst is simply an entertaining, visually gorgeous classic. NetEnt truly delivers an out of this world visual experience coupled with generous wins with their flagship video slot. If you’ve been familiar with video slots for a while, you already know, if not, play it to see that Starburst is a one of a kind wonder.