The Dark Knight slot is here to take you to stop charismatic evil Joker.

Join your favourite super hero to save Gotham City and benefit from special offers!
Play 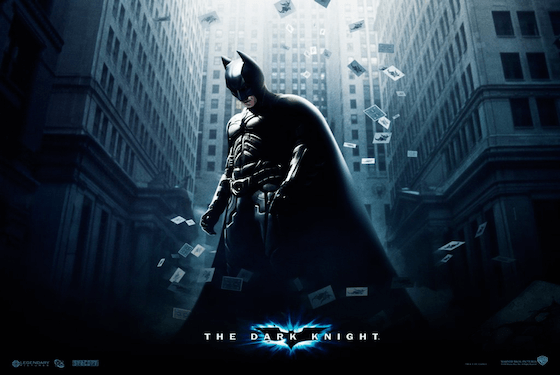 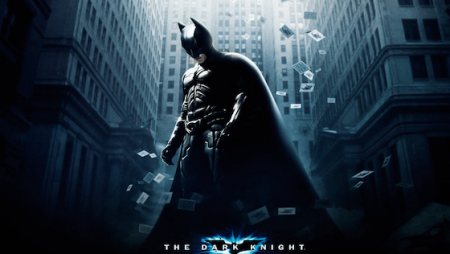 Microgaming chooses the 2008 hit superhero film The Dark Knight to add to their already impressive library of branded games. In The Dark Knight slot, the players can clearly see the admiration the developer had for the source material. The billion-dollar grossing theme is supported with a progressive jackpot that often passes the million dollars.

With a standard board of 5 reels, 3 rows that has 243 ways to win enabled, The Dark Knight Online Slot’s RTP rests at a slightly above average with a 97% rate. The betting range goes from €0.30 as the lowest up to €150 as the ceiling with a couple of features to spice things up. So, it is favourable for both high-rollers and decent players.

Visiting Gotham City might be a bit dangerous, not to mention impossible. Better sign in on any of the casino sites on our list to play The Dark Knight Online slot from any device, anywhere.

All the visuals from the game come directly from the 2008 blockbuster movie that lends its name to it. So much so that, whenever you land a big win, the game shows you brief clops of the movie while it racks up the tally. You can turn off the said feature if you find it distractive but it just goes to show the dedication towards the license Microgaming had.

The icons on the reels are all headshots from the primary and secondary characters from the movie. Thus this includes Batman, The Joker, Harvey Dent, Commissioner Gordon, Rachel Dawes, and a few others. The Batman symbol itself is the wild, and a disturbing graffiti of the Joker with a batman symbol-like smile is the scatter. 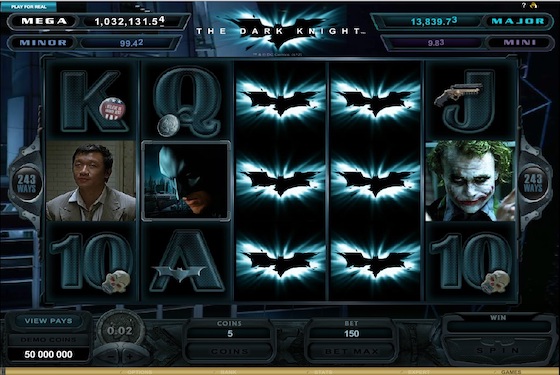 While Gotham City might be metropolis besieged by crime, it also happens to be, at least in this instance, a place full of bonus features. First of all, the game’s wild, which is the batman logo, acts as a stacked wild. Thus, wilds often appear piled up upon one another, extending the possible number of combinations available for you.

On second place, and most suiting due to this being Gotham City, after all, is the Batman or Joker feature. At any given moment you are playing, an animated figure of either Batman or The Joker appears on the gameboard. It happens completely at random, and after a brief animation, the character gives out a random prize. An extra wild reel, an additional win multiplier, or a simple cash prize is what they’ll deliver.

And third and finally it’s the main attraction of the game: The Progressive Jackpot. Made up from a percentage from every bet players make, its value doesn’t fall short from the amounts stolen from banks routinely across Gotham City. Getting your chance at it depends entirely on the game since it happens randomly.

Once it does, a big wheel of fortune appears on-screen with 2 selector arrows, one of Batman and one of The Joker. Choose one and watch the wheel spin. The colour of the stripe you arrow ultimately ends up pointing at determines which jackpot you get. Purple one stands for ‘Mini’. Meanwhile, navy blue does for ‘Minor’, electric blue for ‘Major’, and white for ‘Mega’. The higher the tier of the jackpot, the fewer for its colour appear on the wheel, hence why there’s only one white stripe for the ‘Mega’ jackpot.

Land three or more of the batman-symbol-shaped-mouth Joker graffiti scatters (you’ll know it when you see it) to trigger the free spins. You get 15 free spins that have an attached 2x multiplier applied to every single winning.

Also, throughout your free spins, the Batman or Joker feature is still active just like in the base game and can also award you extra free spins.

The free spins are not re-triggerable even if you land more scatters during them.