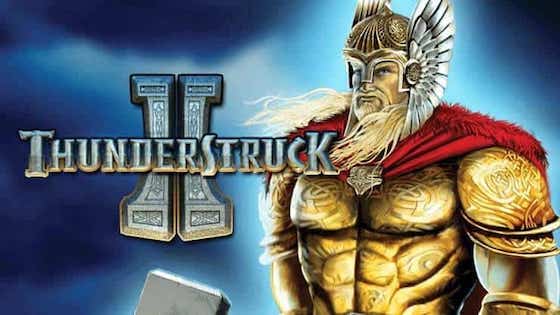 In 2010, Microgaming unleashed the sequel to its legendary title ‘Thunderstruck’ and the world of video slot has never been the same. Thunderstruck 2 came to provide massive winnings thanks to its cleverly integrated mechanics. To this day, the game is not only recognized as a cult classic, but it’s even more popular than ever before, regularly ranking among the most played.

The gameboard is a classic 5 reels and 3 rows setup with 243 ways of win perpetually active throughout it. Thunderstruck II Slot’s RTP sits at a more than reasonable 96.65% with a betting range going from €0.30 up to €15. But it is its free spins where the real, thunderous magic happens.

Refrain from looking for Asgard or Valhalla on your own, rather, come and join any casino site from the list to enjoy Thunderstruck II.

The game’s theme is all about Norse mythology, particularly keen on the thunder that Thor, the God of Thunder himself regularly provides. The gameboard features runic is suitably ancient and runic-looking while the icons on the reels pay full homage to the Norse myths.

A Viking longship, the fabled land of Asgard, the goddess Valkyrie, and the Gods Loki, Odin, and Thor are the high-paying icons. The game’s scatter is none other than Mjolnir, the faithful hammer of Thor and the wild is the very game’s logo. Lots of thunder are also, understandably, part of the visuals here.

The Thunderstruck II slot features an absolutely awesome feature known as the Wildstorm. It triggers completely at random during the game and, once it happens, Thor, the God of Thunder, pays you a visit. He will appear and turn any number of reels into full wild reels that will give you massive winnings. He can even turn the whole five reels into wild reels for a staggering payout of 8,100x on your stake. Pray for thunder!

Land three Mjolnir scatters to enter the Great Hall of Spins. In there, there are four different free spin rounds possible to choose from, but you need to unlock them by entering multiple times. Said rounds are:

Once unlocked the Thor Free Spin, you can choose which free spin feature to play when entering again to the feature. Also, the game remembers how many times you’ve entered between sessions so you don’t have to unlock them all again.

There’s nothing more that could be said about Thunderstruck II other than it has been consistent since 2010 one of the people’s choice. And it doesn’t show signs of falling out of favour any time soon. It safe to say that almost every slot player out there is constantly looking to make their way into the Great Hall Of The Spins.