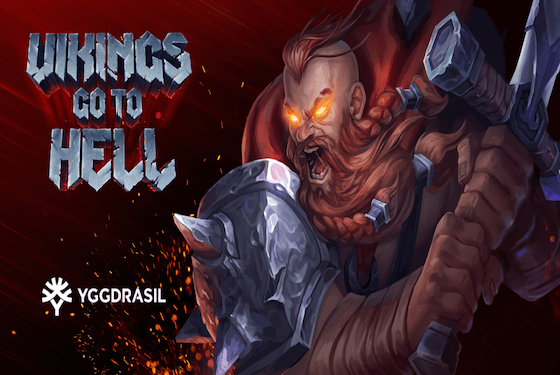 Nordic mythology invites you to fight against the demons and collect the rewards. Get in the battlefield and beat the evil with unique bonuses. Play Now
Game Provider:
Yggdrasil
RTP:
96.10%
Free Spins:
7
Volatility:
High
Rating:

Yggdrasil Gaming adds a new chapter to their ‘Vikings’ series with the Vikings Go To Hell slot. It comes packed with a number of features that will make you excited.

Possessing a popular 5 reels, 4 rows gameboard with 25 paylines enabled, the Vikings Go To Hell Slot’s RTP rate is 96.10%. It’s betting range has €0.10 as the lowest and €125 for a max. Furthermore, it is seriously full of special features.

Assembling a band of rowdy Viking and going to Nordic hell sound hard enough, why not log in to one of our favourite casino sites an play it there? Grab your axe and join the battlefield.

The intro animation for the game tells you all you need to know about the theme. It’s a violent raid into a hellish landscape with some seriously heavy metal- looking protagonists. The lower paying icons of the game are each Viking’s weapons: swords, arrows, throw axes, and hammer.

The high paying icons are the four Vikings themselves, each distinctive and with a different colour to represent them. The wild is a golden icon that reads ‘WILD’ on it, and a raging demon symbol with ‘free spins’ as a caption is the scatter. And there’s a treasure chest bonus symbol that appears only on the 5th reel as well.

There are just so many features intertwined in the Wiking Go To Hell slot that is difficult to even begin to know where to start with but lets brave into it. First of all, you go to know the game makes use of the ‘Rage Meters’ mechanic. Your four Viking icons are more than that; they are also characters that are slowly building up their inner rage, or rather, their Rage Meters.

When a new player enters for the first time to the game, they receive 50 rage points for a single randomly chosen Viking. You collect rage points for every Viking by engaging in the Demon Fight feature that works in unison with the rage meters.

Every time you land only 2 demon scatters after a spin, a demon fight happens. All Viking coins present will showcase animation in which the Viking either slays the demon or get hits. The Viking that happens to slay their demon receives 1 rage point, and a respin happens where that Viking becomes a sticky wild. Collect 100 Rage Point for a Viking so they enter Berserk Mode where they will win all fights but don’t collect any rage points.

There is also a treasure chest feature which is a treasure chest icon that lands only in the 5th reel of the game sporadically. It opens to reveal two kinds of randomly awarded stone tablets: The Good Tablet or The Epic Tablet.

Land three or more free spins demon scatters to enter the level 1 free spins round. Landing three gives you 7 free spins, four awards 12, and 5 scatter give out 16 free spins after the demon fights animations to pass.

Alternatively, you can attain the Level 1 Free Spin by filling the rage meter of 1 Viking. It gives you 7 free spins but the Viking that went berserk win all fights it gets into. Yet, it doesn’t collect rage points.

Here, one treasure forms the treasure chests can get you to the free spins round.

Landing one during it gives free spins, random wilds or a fully wild reel.

During the free spins, every Viking symbol that lands will automatically face a demon, turning into a sticky wild and awarding one rage point. One single Viking in each spin will not face a normal demon. However, the lord of chains has three-point heath bar rests at the top of the board. If the Viking can hit it, it loses a health bar. Meanwhile, the Viking becomes a sticky wild and gains 1 rage point.

On level 2, you get 7 free spins, all sticky wilds reset, and any berserk Viking remains berserk. Just as in level 1, one Viking will fight a new major demon, Lucifix, after every single spin. Hitting it awards two sticky wilds and two points for the Viking. Defeating it turns all Vikings into wilds for the remaining free spins and gives you a 3x multiplier on your final winning for the free spins.

Its features are numerous but intuitive, and its rewards can be simply epic. No matter where you look at it from, Viking Go To Hell has a lot to promise to players who only need a little time to dominate the learning curve. Hold your weapons, players, tonight you fight in hell.